Donations are no longer being accepted.

To everything there is a season...And a time for every purpose under heaven.

As of November 2015, the Clare House has closed.  Please take your donations to another local food pantry.  Thank you!

Easter is only a few weeks away, but winter still has us fooled into thinking spring is a long way off.  Snow and cold seem to drag on forever, but in the beginning of Lent, I purchased our first garden seeds to plant in our little plot out back as soon as the ground is warm enough and the sun dispels the darkness.  Gardening friends have been talking to me about their plans and hopes this year, and even my dear sister, Marie, has her seedlings prepared under her grow light.  So when you begin to plant your rows of lettuce and spinach and peas this spring, please put in an extra row for those who come to us.  We love to share fresh foods along with our many canned and dry goods.

For the first time in 20 years, our Annual Holiday Food Drive did not reach the goal of raising 9 semi-truck loads of food.  We were about 30% down this past year, but we are not discouraged.  We thank all who helped in any way – be it with food or if you came out to help in the warehouse.   After The Pantagraph published our despairing news, more food came during the Christmas holiday, and we are hoping folks will remember us throughout the year.  If you have a business and would like to put a small box out for us during the year and bring it by once a week, we would greatly appreciate it.  Or, when you are out shopping, if you have a few extra dollars to purchase a few cans of soup or fruit, a box of cereal or some large diapers, it would help us to continue to serve.  I have never been discouraged, as I know we are in the hands of God and those in need will be cared for by those who hear their plea.  Perhaps now, during Lent, you could make a commitment to set aside a bit for the poor each week and throughout the year.  Most of us are familiar with “giving up something for Lent;” could we pledge to support and love throughout the year and give back?

Many thanks go out to the university students who have been coming to help hand out food on Friday afternoons.  They come early to visit, and have lots of fun on the stairs passing up the many bags of food.  Those of us who are too old to hoist the 50-80 bags up to the door are so thankful for their strength and youth, but mostly thankful that they understand the importance of our ministry and are committed to coming each week.  Soon they will be graduating or moving on for the summer, so if there are folks who can help us on Fridays from 12:45 – 1:15, beginning in mid-May, please let us know.One of the most difficult jobs for me over these past 37 years, has been answering the phone.  Especially during the holidays, the phone can be non-stop, so our dear, sweet, Mary Smith, offered to take over the job, and I suddenly became a better person.  Mary answered the phone for over a year, and I believe, helped me to be gentler and kinder to myself and others and helped Bob and I have a happier marriage.  Mary is stepping down and taking on other duties, and now we have Cathy Hopper to thank for taking on this very important task.  So if you do call the Clare House line, Cathy is trained to help you out or  she will get in touch with me if needed.

A big thanks goes out to Nancy Cruse, who again sponsored the “Project Love the Ladies Lent Event,” where she collected thousands of sanitary pads and personal items for our women in the line.  Not many people are aware that many necessary items cannot be purchased with food stamps – not only pads and tampons, but people cannot get soap, shampoo, toothpaste, or toilet paper.  So please remember the ladies when you are shopping, and if you travel, please bring us the motel samples of shampoo, lotion and soap.  (And it is Nancy who puts together this wonderful newsletter all these years!!)

We wish everyone a blessed and joyful Easter!  On behalf of all of our brothers and sisters you help to serve, we thank you for helping to not only provide for their needs but for helping them to know they are beloved, and a part of the family of God.

We are not tax exempt…
In keeping with the Catholic Worker Tradition, we have not sought tax exempt status since we are convinced that justice and works of mercy should be acts of conscience that come from personal sacrifice without government approval, regulations or rewards.  Therefore, gifts to Clare House are not tax deductible.

There is a high need for toiletry items:  soap, toothpaste, shampoo, toothbrushes, and laundry soap.

¨ Money for bills, taxes, and insurance
¨ Gift Certificates for grocery stores
¨ Coffee, coffee creamer, sugar
¨ Tickets to anywhere
¨ PRAYERS!
¨ Someone to work at the Soup Kitchen on Thursdays from 7:00 am  – 1 pm with special help mopping floors.  For more information call Gerry Green:  309-825-9774. 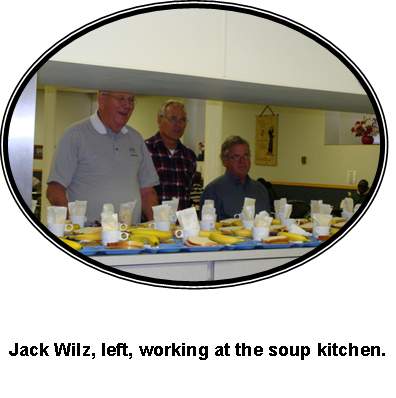 Jack worked with us at Loaves and Fishes Soup Kitchen for four years.  He was a very tall man, with the sweetest eyes and kindest face I have ever encountered.  He had a smile and a look like he knew something pretty special, and when I really got to know Jack, I found out that he did know a lot of incredibly special things about life.  Jack told me, not long before he was diagnosed with brain cancer, that he wasn’t feeling well and I should find someone else to take his place.  He just didn’t think he could make it down every week, and I assured him that if he couldn’t make it down, we would come to get him.  If he couldn’t work, we would make sure he was there just to hang out, as I knew he loved coming and I knew the people he served loved having him there.

When Jack could barely walk, he insisted on coming down to the soup kitchen to say good-bye to everyone.  We all knew he had little time to live, and so all were waiting, and before he got across the dining room floor, he was surrounded with people hugging him, people crying, people patting him on the back.  Words of love poured out of the hearts of those he had been serving for all those years.  A chair was set up near the front table, and people took turns saying good-bye.  Then he pulled out two ball caps and asked to see Darrell and Brian, and he placed them on their heads.  “So you will remember me,” he smiled at them.  Brian looked down and said, “We will never forget you, Jack.”  Darrell cried.  We all took turns weeping in the kitchen, holding each other that morning, that last morning with Jack.

Not long after that, Jack called me to come and see him.  I later found out only a few people were allowed to see him in his final days, and I found our visits together to be some of the most sacred moments of my life.  “You changed my life,” he told me, as I knelt by his chair.  “I thought I was a good person that day I walked into the soup kitchen for the first time.  Now I know what you know – that we are all the same.  No one is better than anyone else.”  I looked up at him, smiled, and said, “I didn’t change you, Jack, the people changed you.”  He then asked a favor of me.  He wanted me to invite all of our soup kitchen guests to his funeral, but even more, he wanted a few members to be his honorary pall bearers.  He wanted to make a statement in his dying, that all of us are equal and that he loved the least of our brothers and sisters and wanted them there in positions of honor.  He chose the most broken, those who had helped him hand out water on the hottest of days, those he sat and shared lunch with him every week for those four years.  He chose the oldest person, the broken, both physically and mentally, he chose black and white, and then he asked me to help them walk up the aisle behind his casket and sit in the front pew of the church.  “I want the least to have the seats of honor,” he told me.  And so they did.

I have been with a number of people who were dying, and I can honestly say that Jack’s whole dying process was one of the most blessed I have ever witnessed.  He was completely at peace with going, and got to spend quality time with his wife, family and close friends.  He was ready to go, and when Fr. Ric came to bring him communion on his last day on earth, Jack decided it was then, at that very moment, it was time to go home.

It was not me who changed Jack’s life, but it was Jack who changed ours.  I do believe that so often people die as they have lived, and that is exactly the experience of this blessed man.  He was at peace in his living and generous giving of himself not only when he was fully alive, but also in his dying.  I know he rests in peace, as he lived in peace.  Now he watches over us, and every time Darrell or Brian don one of his hats, or Zilpha passes out water on a hot day, or Viola greets someone as they come in the door, Jack will be there. 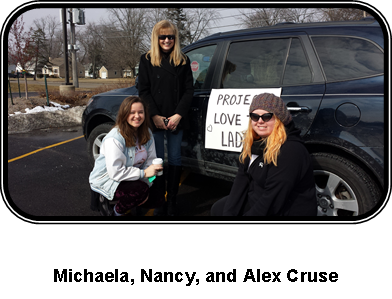 Often we do not know what to do to help those in need.  In examining our own lives and learning to be grateful for even the smallest blessings we have, we can come up with a way to help.

The realization that not every woman can afford feminine hygiene products breaks my heart.  Most of us have never had to go without ourselves or been in a situation where we cannot provide them to our daughters.  A great number of women in our community have been.
Project Love the Ladies Lent Event was conceived to fill that need.  Three drop off times were scheduled at various locations around Bloomington-Normal.  Women of our community stepped up to the challenge and provided feminine products for the women in our community.
Thank you to everyone who dropped off donations (especially when the temperature was 18 degrees!)

Pads are the most needed item.  The next time you are dropping a donation to the Clare House you may want to include some.  Such a small thing is a huge blessing to a woman in need.

Donations are no longer being accepted.